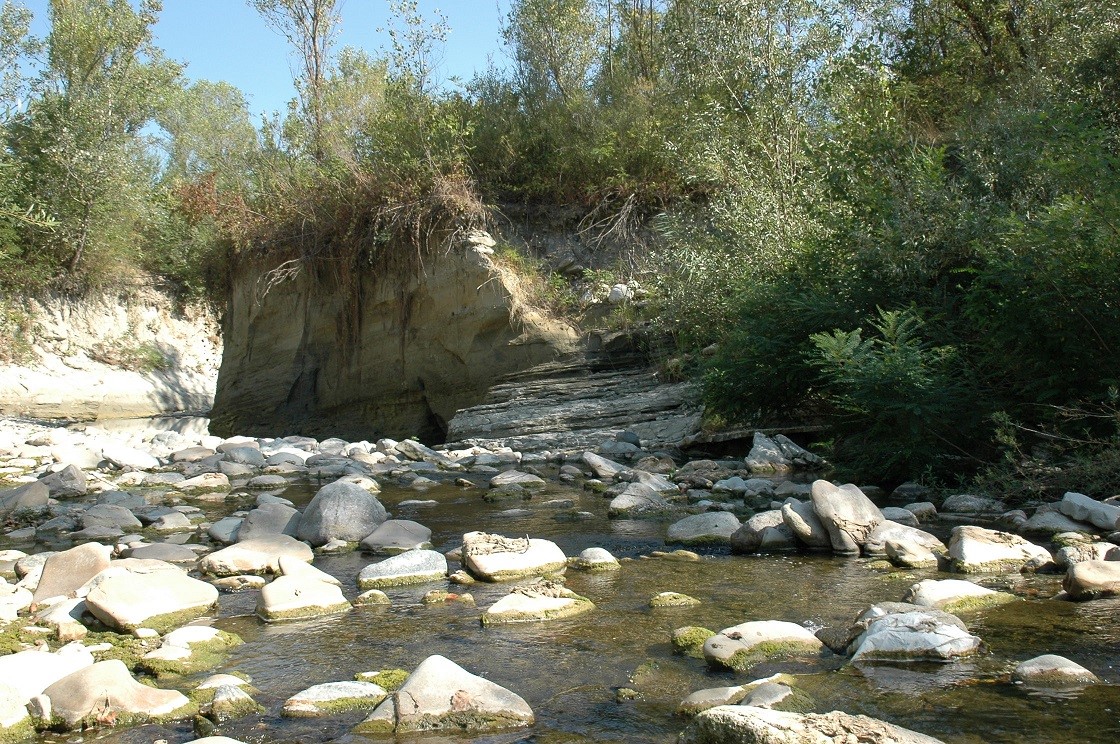 It is a protected area of indescribable charm that offers not only pleasant landscape views, but also important data for the reconstruction of the history of the region. The erosive processes on the banks of the river have revealed fossil deposits of great value from the Tertiary and Quaternary periods, making this district well-known to the international scientific world.

The hall of honor of the museum houses the complete collection of species characteristic of the Piacenziano stratotype visited by scholars who come to Castell’Arquato to carry out research from all over the world. Most of the fossils found in the outcrops in which the stratotype is present belong to the Molluscs and more precisely to the two classes of Gastropods and Bivalves and, with few species, to the class of Scaphoopods.

The importance and the great variety of fossils in Castell'Arquato, especially with regard to malacology, repeatedly attracted the attention of numerous scholars including Brocchi who in his "Subappennine fossil conchology" in 1814 presents his own collection ( one of the best known collections of the European Tertiary), now preserved in the Natural History Museum of Milan, where there are several finds from Castell'Arquato.

Since the late eighteenth century, the fossil record of the “Pliocene Sea” was brought to light in the clay and sandy soils of the eastern Apennines of Piacenza, and in particular along the steep walls of the calanchi and in incisions made by small streams in the valleys of the Nure, Chiavenna, Arda and Ongina. But already three centuries before this, Leonardo da Vinci, who first recognized the organic origin of fossils, saw the shells collected in the Piacenza area while he was in Milan, working on the equestrian statue of Francesco Sforza. His reference to these fossils, which he called nicchi, is shown in the celebrated Leicester Codex: 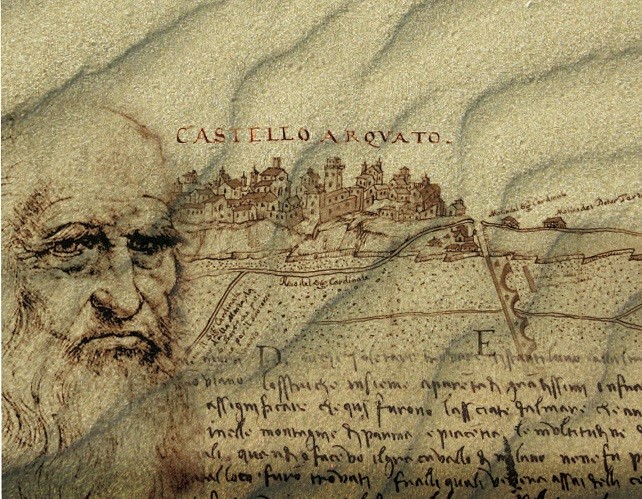 "In the mountains of Parma and Piacenza a great multitude of worm-eaten shells and corals can be seen, still joined to the stones, which I had the opportunity to see when I was living in Milan and working on the great horse. A large bag of them, some in an excellent state of preservation, was brought to my studio by some peasants”

Aristotele (384-322 b.C.) influenced the ancient thought about the origin of the fossils. He thought they derived from a "formative vis" produced during the deluge of Deucalione and Pirra.

At the origin of the fossils Avicenna (980-1037) thought  a "plastic vis" would have been able to shape bodies, but not to infuse life. The same Avicenna resumed the Aristotelian conception that there was the Universal deluge at the origin of the imprints of aquatic animals. This thesis followed by the official science until Leonardo’s age.

The first to understand the true importance to these remains were some landowners of the Val d'Arda. They began to gather large numbers of fragments of shells and bones in the vicinity of the villages of Lugagnano and Castell’Arquato and so created the first collections.

But the scholar who contributed most to the research and knowledge of the local Pliocene was Giuseppe Cortesi, adviser to the court of Piacenza and later honorary professor of Geology at the University of Parma. He became so engrossed by the search that he hired observers to supervise the region and alert him if skeletal fragments emerged. He soon succeeded in amassing a collection not only of shells but also the remains of rhinoceroses, elephants and above all dolphins and whales. 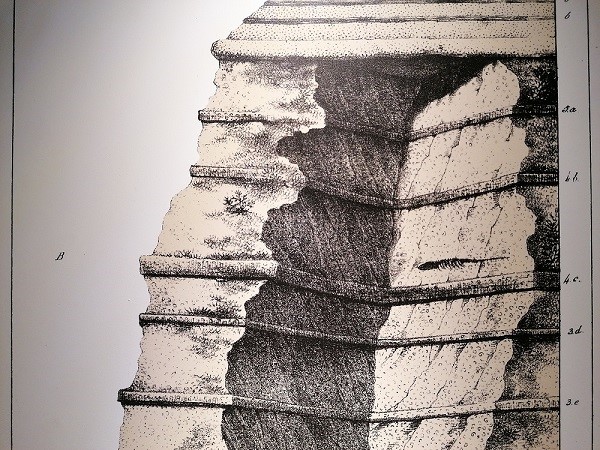 The numerous fossil skeletons collected by Cortesi before 1809 were purchased by the Lombardo-Venetian Kingdom and later moved to the Natural History Museum of Milan but lost during World War II. The material gathered by the naturalist after 1809 was purchased by the government of Parma in 1841 for the Cabinet of Natural History at the University, which later also acquired the fossil skeletons of other cetaceans found on the Piacenza hills from another local researcher, Giovanni Podestà of Castell’Arquato.

The importance and great variety of fossil specimens, especially with regard to malacology, on various occasions aroused the interest of scholars, including Giovanni Battista Brocchi. In his “Conchiologia fossile subapennina” (1814) he published his collection (one of the most famous of the European Tertiary period), which is now in the Natural History Museum of Milan and contains numerous items from Castell’Arquato.

Georges Cuvier was also interested in the fossils found in Val Chiavenna and Valdarda, personally visiting Cortesi’s collection and mentioning it in his works.

The interest in the discoveries made in the Piacenza area during this period was heightened by the fact that most of the local collections were sold abroad and this helped disseminate the fossils of the Val d'Arda to the major European museums and stirred the interest in this location among scholars from various countries. 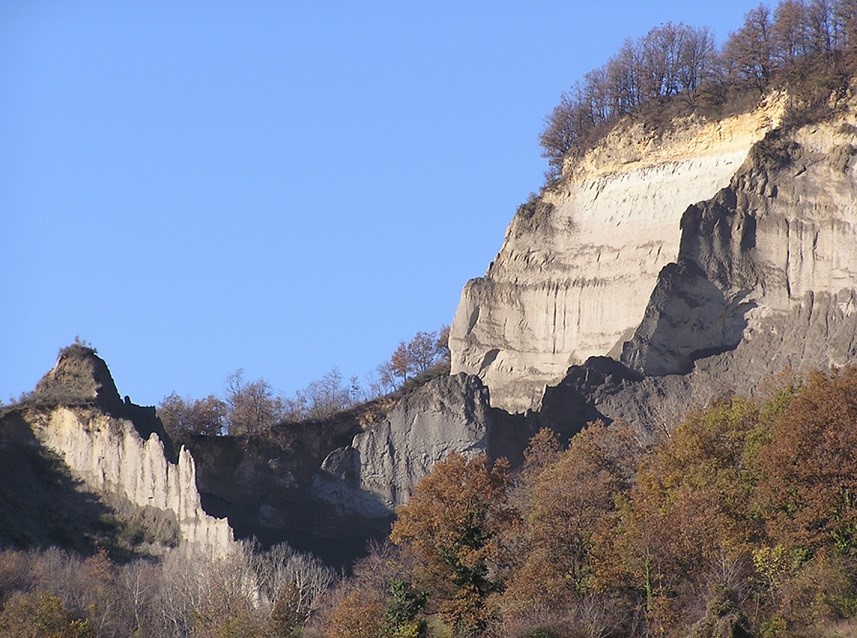 In 1858 the Swiss scientist Carl Mayer developed a geological plan which takes its name from the province of Piacenza: the Piacenzian (Piacenzische Stufe) used to indicate the “blue clay” (Blue Mergel), of which the Val d'Arda is the most typical zone. Subsequently, in 1865, Lorenzo Pareto suggested taking as the “type section” of the Piacenzian the succession of strata outcropping on the left bank of the Arda Torrent between the towns of Lugagnano and Castell’Arquato.

Recently the scientific community has returned to the concept of the Piacenzian to redefine its time limits (the term is used to indicate land of marine origin between 3.5 and 2.5 million years old) and above all proposing to reuse as the basis of comparison that part of the stratotype that lies between Monte Giogo and Castell’Arquato, where the faunal associations clearly document the “extinctions” caused by the climatic deterioration that accompanied the formation of the Arctic ice caps.

The extraordinary abundance of fossil remains in these sediments and their excellent state of preservation provide a particularly significant basis of study for those who are interested in issues bound up with the evolution of the population of the Mediterranean basin and above all the faunal changes that accompanied its environmental development.