B - THE GULF OF WHALES

Castell'Arquato’s hills are modeled on the sediments deposited in a period of time ranging from 5 to about 1.2 million years ago in an arm of the sea that occupied the current Po Valley. This sea was the natural habitat of a great quantity of organisms: molluscs, crabs, corals and cetaceans. 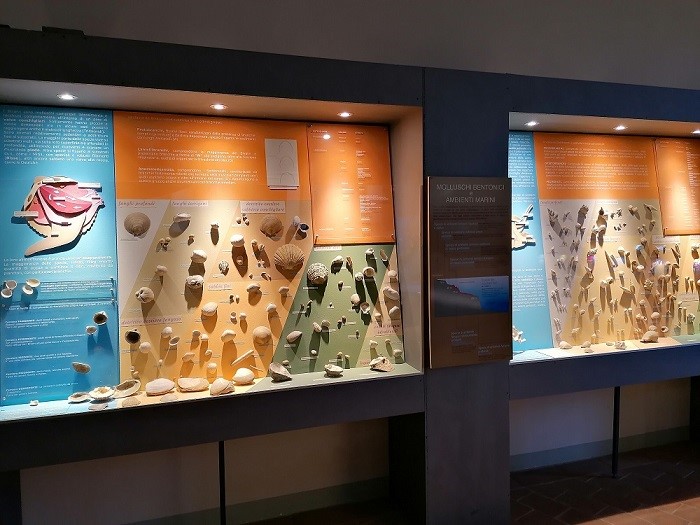 Their remains, imprisoned for millennia in the sands and clays, today appear in the form of fossils. Most of the eastern part of Piacenza’s area is so rich of fossils that a Pliocene geological plan is universally known as "Piacenziano". 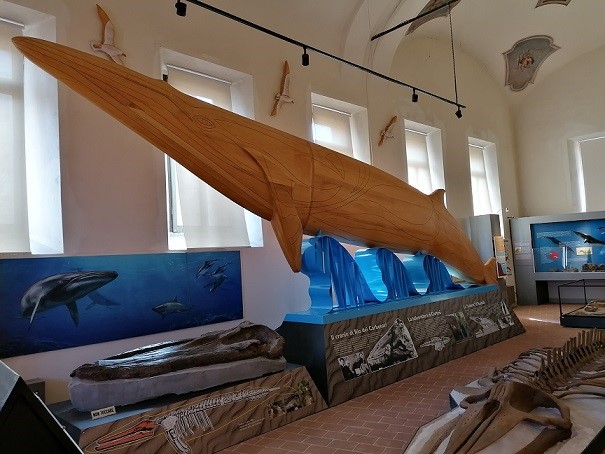 The process that led to the formation of the Apennines began about 35 million years ago, when Corsica and Sardinia split off from the southern part of what is now France and began to rotate anticlockwise. With the emergence of the mountain range of the Apennines, the central and northern Mediterranean found itself divided in two: a palaeo-Tyrrhenian part in the west and a palaeo-Adriatic part in the east. The palaeo-Adriatic region was continued into a vast gulf that stretched into what is now the Po Valley and came to include almost the whole of Piedmont. Between about 10 and 3 million years ago (hence between the Miocene and Pliocene), this great gulf was occupied by fairly shallow seas that enjoyed a warm climate. These waters contained dolphins, whales, sirenids and fish, many of which were tropical or subtropical in affinity, together with hundreds of species of molluscs, crabs and other invertebrates.

29 – THE ORIGIN OF THE CETACEANS 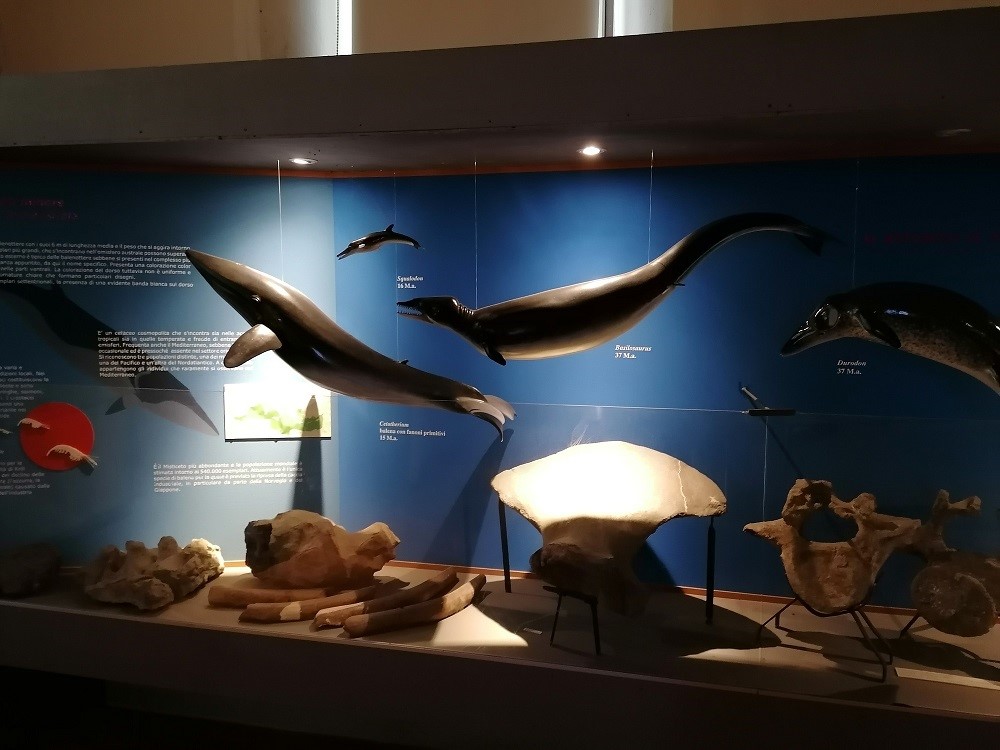 The problem of the origin of the cetaceans still stirs heated debate among scientists. Although the study of the DNA of the species currently living and the discovery of new fossils have provided new clues, scientists are still not agreed on what mammal species still living is closest to the whales and dolphins. The fossils suggest that the origin of cetaceans should be sought in an extinct group of cloven-hoofed animals (mammals that today include pigs, ruminants, antelopes etc.) termed mesonychids. These were the only carnivorous artiodactyls that ever appeared on earth and the cetaceans, as we know, are likewise carnivores. The mesonychids had a very large head and delicate legs like those of a deer. The study of their DNA suggests instead that cetaceans are closely related to today’s hippos and are derived from the ancestors of these large mammals with amphibious habits. Recently some Palaeontologists have presented anatomical evidence in favour of this last conjecture. In particular, the form of the legs joints (the ankle, above all) of the oldest cetaceans and of hippos are said to have many features in common. But there still remain many questions that new fossils and more sophisticated analyses should be able to answer. 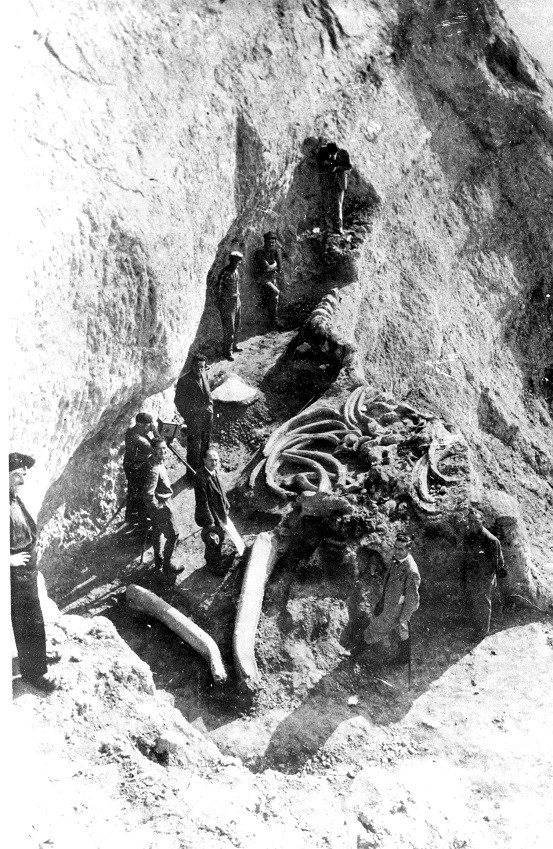 The fossil record of the “Pliocene Sea” has been brought to light since the late eighteenth century along the steep cliffs and gullies and the small watercourses cut into the rocks between the Torrente Nure and Torrente Arda.

Among the first scholars to make a decisive contribution to exploring and understanding Pliocene Piacenza was Giuseppe Cortesi, a counsellor at the court of law in Piacenza, and later honorary professor of Geology at the University of Parma. His fascination with the relics of the past in this area led him to collect important finds of shells, rhinoceroses, elephants, dolphins and whales. In addition to the first documented discovery of the remains of a whale, which occurred in 1793, Cortesi also had the merit of describing his finds in detail in his “Geological Essays on the States of Parma and Piacenza”, published in 1819. On Cortesi’s death there was a sharp decline in research, except for the activity of Giovanni Podestà, who collected fossils and in 1842 discovered the remains of a dolphin and a whale. In 1886 the discoveries were resumed with finds of several vertebrae in the Burrone del Gallo, under Monte Pulgnasco at Montezago. In late 1895 the remains of a delphinoid were found in Rio Stramonte by the Pallastrelli brothers of Castell’Arquato. Two years later, in the vicinity of Bacedasco the remains of a Burtinopsis similis were brought to light, and in January 1899, again in Rio Stramonte, various skeletal parts belonging to a whale were recovered. These were the last discoveries of the nineteenth century and attracted the interest of the leading palaeontologists of the period. They included Cuvier, Brandt, Van Beneden and the Italians Strobel, Capellini, Del Prato and Simonelli.

The early decades of the twentieth century were not particularly rich in finds of the remains of cetaceans and other fossil vertebrates. There were only sporadic finds of vertebrae and ribs until 1934. In that year Dr. Antonino Menozzi discovered the remains of a large whale in the calanchi (eroded hillsides) of Monte Falcone, near the medieval village. The complex work of recovery lasted almost two years and brought to the light, in addition to the spine, a large number of ribs and the left shoulder blade and jaw.

To record the exceptional discovery the Istituto Luce made a short documentary that was screened in cinemas around the country. After this no significant remains of cetaceans were found until April 1983, when the fossil skull of Balaenoptera acutorostrata came to light almost complete and very well preserved, in the calanchi overlooking Rio dei Carbonari. The discovery was made by Roberto and Piero Volpi and Luigi Rusconi during one of their periodic searches for fossils in the calanchi near the village of Tabiano di Lugagnano. In 1986, skeletal parts of fin whales were found in the calanchi of Bacedasco and near Chiavenna Rocchetta. Also in Val Chiavenna, along the eroded incisions of the Rio Stramonte, a dolphin skull came to light in 1991. The last major discovery dates from 2009: the skeleton of a dolphin, found in the village of Torrazza di Montezago by Paolo Umili and Paolo Evangelista.

31 - The Dolphin of the Val Chiavenna 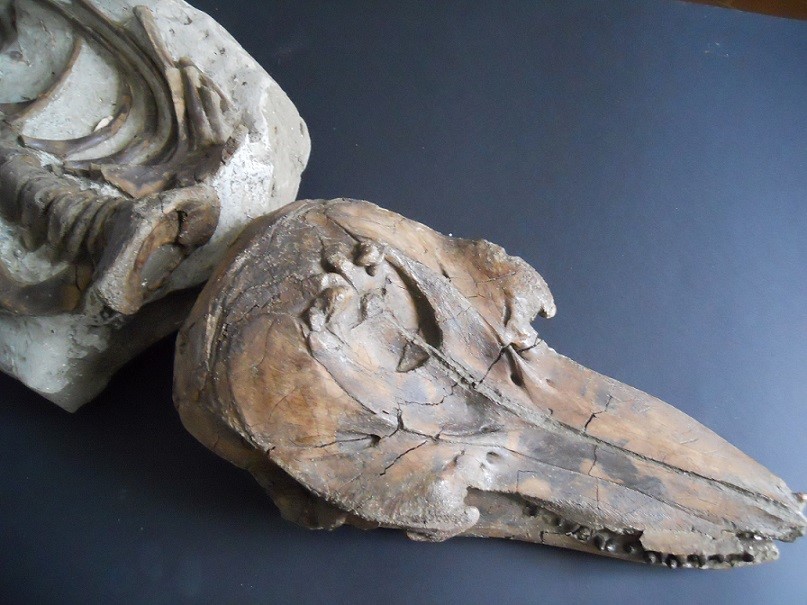 This specimen was found by Paolo Umili and Paolo Evangelista of the “La Xenophora” Group on 5 October 2009 in the Pliocene clay of the Val Chiavenna (Lugagnano).

It consists of a skull in a splendid state of preservation, with the rami of the mandibles, teeth and auditory bones still in articulation, a block with 7 cervical vertebrae, 6 thoracic vertebrae, 6 ribs on the left side, 9-11 fragmented ribs on the right side, a bony fragment tentatively identified with the hyoid bone, and a block containing 7 lumbar vertebrae. The find is still being studied.

The skeleton rests on its back and shows signs of the collapse after death of the left side of the rib cage onto the right side, which rested on the silt-clay substrate.

From an anatomical point of view, the wonderful state of preservation of this skeleton allows very close comparisons with the living and fossil species of toothed whales. First of all, it can be observed that the teeth suggest a particularly strong affinity with the bottlenose dolphin (or tursiope) and the zygomatic arch has features in common with delphinids such as Sousa or Steno. Other details of the cranial anatomy suggest a particular similarity with the genus Steno, a dolphin currently widespread in tropical seas. However, since the find is still being studied, it is possible that closer examination will reveal characteristics that make it possible to assign it more precisely to a known genus of cetaceans.

To do this, the study of the skeleton will make use of the additional information derived from an X-ray examination using computed tomography (CT). This examination was performed through the good offices of Giancarlo Artoni of the Department of Radiological Functions of the AUSL of Piacenza UO Radiologia Valdarda at the Hospital of Fiorenzuola d'Arda directed by Dr. Egidio Carella. The CT will make possible the virtual reconstruction of the auditory bones still encapsulated within the matrix and the reconstruction and study of the brain surface. These data will be of great value in the study of the specimen’s phylogenetic relations and so permit, for the first time in Europe, the reconstruction of the surface of the brain of a cetacean of a species extinct for over 3 million years.

The conservative restoration is funded by the Istituto Beni Artistici, Culturali e Naturali of the Regione Emilia Romagna.